Richard Wottrich is an exclusive contributor to Seeking Alpha. The following article was posted October 4th, 2016:

Deutsche Bank continues to pursue a swift deal with the U.S. Department of Justice (DOJ).

The German government is publicly refusing to backstop Deutsche Bank.

Deutsche Bank continues to pursue a swift deal with the U.S. Department of Justice (DOJ)

Bank officials are seeking to negotiate a swift deal with the U.S. Department of Justice (DOJ), which is demanding a fine of up to $14 billion for selling U.S. toxic mortgage-backed securities leading up to the 2008 global financial meltdown. The odds of the DOJ agreeing to such a deal ahead of the U.S. presidential election on November 8th are slim and none – hence the uncertainty will continue for at least another month.

Deutsche Bank has assets of $2 trillion and over $247 billion in cash on hand.The bank just sold Abby Life, a British insurance subsidiary, for $1 billion. Deutsche Bank AG is also selling a $3.9 billion stake in Chinese lender Huaxia Bank Co. and is seeking permission to move those proceeds out of China.

In the Orwellian-speak of the global banking world “too-big-to-fail” banks’ are called G-SIBs, for globally systemically important banks. Deutsche Bank is a G-SIB and thus a surrogate for the entire European Union banking sector. Deutsche Bank is the lead bank in Germany and the 11th largest bank in the world, yet ranked by a market capitalization of $16 billion the bank does not crack the top 65. Even a reduced DOJ settlement of under $6 billion would put severe pressure on Deutsche Bank.

Deutsche Bank risk leverage is roughly 40 to 1, far higher than similar leading banks. In comparison, Lehman Brothers had a leverage ratio of 30.7 to 1 in 2007.

Deutsche Bank is a world leader in derivatives, with an exposure of roughly $46 trillion at the end of 2015 (15 times Germany’s GDP). That’s around 12% of the total notional value of derivatives outstanding worldwide ($384 trillion), according to the Bank for International Settlements.

International accounting standards obscure measuring derivatives risk at Deutsche Bank. Most of the world including the European Union and China use International Financial Reporting Standards (IFRS), while the U.S. uses Generally Accepted Accounting Principles, or GAAP.

Michael Lewitt, editor of the Credit Strategist letter said of Deutsche Bank derivatives positions that in a perfect world longs and shorts would roughly balance. But in a global financial crisis, if counterparties cannot meet their obligations, this balance of derivatives positions would collapse. Said Lewitt, “DB’s net exposures are sufficiently large to blow up the financial system.”

Deutsche Bank shorts total 39 million shares, 2.8 percent of its outstanding shares. Market makers report that hedge funds are targeting a Deutsche Bank share price of $8 or lower. Over 10 hedge funds that clear derivatives trades with Deutsche Bank have moved some holdings out of the bank. The bank has stated that it has about 800 hedge fund clients.

And beyond all this, European Central Bank (ECB) stress tests are generally regarded as not credible. All these factors suggest that the share pressure on Deutsche Bank will continue. Institutional clients have nothing to lose by moving accounts to banks under far less pressure.

The German government is publicly refusing to backstop Deutsche Bank.

Recent polls in Germany asking if the government should help Deutsche Bank show that 69 percent are opposed and 24 percent favor backstopping the bank. Further, two-thirds of Germans oppose a fourth term for Chancellor Angela Merkel. The political atmosphere in Germany suggests that Chancellor Angela Merkel would be committing political suicide if she bailed out the bank.

However, the European Union (EU) has a major stake in backing Deutsche Bank, as Germany is the economic engine at the heart of the EU. Allowing Germany’s flagship bank and iconic brand name to fail would damage the reputation of both Germany and the EU; especially with Brexit Article 50 looming on the horizon. Allowing Deutsche Bank to fail would put severe pressure on other EU banks, especially in Italy.

The ECB has massive liquidity reserves available to protect G-SIBs. Germany may yet turn public sentiment around regarding assisting its iconic brand and leading bank. Deutsche Bank could theoretically utilize contingent convertible bonds, or CoCos, to meet its obligations under any DOJ settlement. As for the German economy, the German trade surplus is now 9% of gross domestic product, most of it with the rest of the EU. Germany needs Deutsche Bank to recycle that surplus back into the economy. 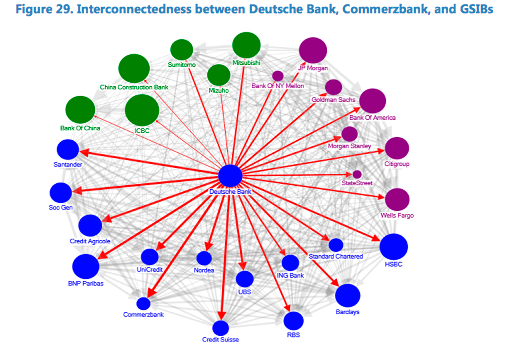 As the International Monetary Fund (IMF) above chart demonstrates, Deutsche Bank is highly interconnected with other financial institutions. Allowing the bank to fail would have severe global financial markets repercussions. On balance, the evidence suggests that Deutsche Bank will survive; albeit as a smaller bank with highly reduced leverage. The EU should not compound the impact of Brexit with the failure of Deutsche Bank.